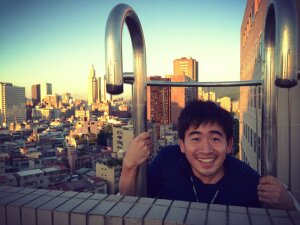 I am a fourth-year graduate student. I grew up and studied in Hong Kong where ironically you can rarely see the night sky. On a day-to-day basis, you can typically find me attempting to ignite baby-stars in the early universe inside big super-computers. When I am not playing god in front of my pixelated universe, I am in the kitchen or the gym.

The emergence of first stars marks the end of the cosmic dark ages. They transform the early universe from its simple initial state to a universe with ever-growing complexity. The earliest stars altered the dynamics of the cosmos by heating and ionizing the surrounding gas, producing heavy elements that pave the way for the formation of later generations of stars and eventually planetary systems like our own solar system. The eventual collapse of some of these first stars might be the seed for growing supermassive black holes. These objects are too faint and distant to be observed with our current generation of telescopes. We must, therefore, create our own laboratory and simulate their formation with supercomputers.

One bottleneck of current state-of-the-art simulations is to solve for the chemistry involved which governs the heating and cooling of these primordial clouds and may dictate the accretion rate, and eventually the characteristic mass of PopIII stars. I and Matt are currently working on a chemistry model that enables us to push our simulations to higher density and seeing the first lights of these objects.

As a side project, I am also working with Prof. Mouschovias to understand the role of magnetic fields in the theory of present-day star formation. Understanding star formation rates is a central goal of modern star formation models, which most of them include only gravity and turbulence. However, observations seem to show that magnetic fields might play a bigger role than previously thought. We show that in a face-on galaxy M51, the mass-to-magnetic-flux ratio is a more appropriate parameter to characterize the status of star formation as opposed to the commonly used virial parameter (ratio of gravitational energy to the turbulent energy).